What is the true America? 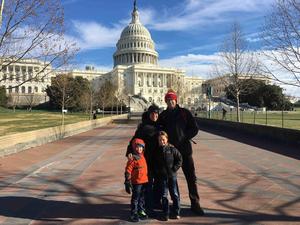 BPL's Co-Executive Director shares a conversation he's had with his children. A story about who America is, which is the story of who we are.

If not for the events which unfolded on January 6, you might be surprised to hear that my 11-year-old daughter turned to me in confusion and asked, “Dada, what is the true America?”

Over the past few weeks, we’ve been reading, Art Spiegelman’s seminal allegory Maus: A Survivor’s Tale, which tells the story of his father, holocaust survivor Vladek Spiegelman, through narrative and illustration.

I first read Maus at about my daughter’s age, and am now reprocessing the intense emotions, this time with her at my side. One of the things I’ve found most upsetting is the speed with which the normal life of a young budding entrepreneur in 1930s Poland was rapidly transformed into cataclysmic chaos and carnage. In reading together, my daughter has learned just how prone to change fragile lives can be, and that rapid catastrophic changes can transform an otherwise seemingly stable government into the despotic regime of a tyrant.

We’ve been reading Maus chapter by chapter. Part of the reason we do this is that it provides an opportunity to discuss how each chapter relates to our lives and experiences and other stories we’ve read. After Maus, we then read, compared, and contrasted narratives written by our own relatives’ experiences during WWII. Unfortunately, few in my family know the stories of the countless people on my fathers’ side who died in concentration camps. But we have cousins from my mother’s side, who survived Auschwitz and other camps. I vividly remember the mixture of fascination, revulsion, and fear the first time that I saw tattooed ink numbers drawn on a forearm.

One uplifting truth of Maus is that Vladek Spiegelman’s time in concentration camps concluded when he and thousands of other prisoners were liberated by American Soldiers. The feeling of miraculous joy at the arrival of the “good guy” American GIs is intense and memorable. Shortly thereafter, in a process similar to that experienced by so many of my own relatives, Vladek emigrates out of his war-ravaged home country, to the promise afforded at the time by the United States.


Is this the true America?

Consider another story we’ve recently read together, George Takei’s They Called Us Enemy. In it, George tells of his family’s experiences in a Japanese internment camp during World War II. My daughter’s brow furrowed in sadness and anger as she learned how people of Japanese descent, many US citizens, were rounded up based upon their race and imprisoned for little more than suspicion. She was shocked, as any 11-year old might be, when she learned that they were unlawfully imprisoned and guarded by American Soldiers.

My son read the title of the book and wasn’t sure whether it was They Called Us Enemy or They called US Enemy.

Is this the true America?

My daughter and I discussed how my paternal grandfather’s family fled the antisemitism of Poland in the 1910s and arrived in New York City. While his parents worked low-wage jobs, my grandfather, Daniel Frishman, benefited from the public school system, had the opportunity to attend college, and went on to begin a PhD in chemistry. Shortly after the outset of WWII he was recruited and eagerly volunteered for a special project he thought could help bring a faster end to the war. He was motivated to help defeat the Nazis because he heard rumors of how they were slaughtering his relatives still trapped back in Europe. The US government relocated him and his wife and their firstborn son, Michael (my father), to a secret laboratory in Oakridge, Tennessee, where Daniel worked to improve processes purifying Uranium for the Manhattan project.

In order for my daughter to understand that there is no one true America, she needs to know these stories, and many more.

The Uranium purified for the bomb was forcibly extracted from tribal lands, and the earth on which the Oakridge laboratory was built is Cherokee Land. After decades of intensifying resistance and conflict, its first peoples were forcibly removed in the first half of the 1800s by United States soldiers.

The American war machine including the bombers that dropped atomic bombs on Hiroshima and Nagasaki were literally riveted together by women who, after WWII, lost jobs in the manufacturing sector and were systematically denied employment and opportunities for career advancement.

Many Black GIs who had fought in WWII and liberated people around the world from fascism, returned to a still-segregated caste system in the United States. Some were killed, all were prejudicially discriminated against. Through structurally racist policies such as redlining, Black GIs and subsequent generations were denied wealth and prosperity through home equity.


And yet, on January 5, 2021 (the day before the Capitol was stormed), Georgia -- a state in which signs declaring No Blacks, No Jews were prominently posted decades ago -- elected both its first Black and its first Jewish Senators.

Our children need to know that in reality there has never been one true America. As the United States continues to grapple with unsettling events, including the seditious storming of the Capitol Building, many are pointing to warning indicators from over the past four years. However, we would be better to teach our children about recurrent patterns from over the past 400 years.

In December 2017, our family took a trip to Washington DC. We walked along the Mall to the National Museum of African American History and Culture, the Holocaust Memorial Museum, the National Museum of the American Indian, and to others monuments to events and individuals that loom large in American history. We walked down Pennsylvania Avenue from the White House and stood gazing in awe at the United States Capitol building, an internationally recognized symbol of democracy and freedom which is equally recognized by some as a symbol of injustice, imperial military domination, and economic oppression.

In the midst of an insurrectionist mob breaching the walls of this august edifice, President-elect Joe Biden asserted that the scenes of chaos did not reflect “a true America.”

But this begs the questions: What is the true America?


The only truth of America is many truths. Who we are as America is the tangled weaving together of Americans: where we come from, where our families’ and ancestors’ come from, and what they/we have experienced and continue to experience. It is through the intertwining of these lived stories that we can seek to better understand where our culture, interests and aspirations derive from, and hopefully come together to shape a better new way forward.

As we all share stories with our children, we should help them develop an understanding of where they come from, which is where we come from. To know themselves, which is to know ourselves. We should ask children where they hope to go, what interests them, what matters in their community.

We need to focus on creating conditions to help young people develop deep understandings of complex interwoven narratives. To develop rich relationships and engage in the hands-on practice of good work. In this way our schools can become the healing nurseries for the future generations that can stabilize, fix and improve our limping democracy.

In answer to my daughter, we will never create one true America, nor should we aspire to. But we can, and should, create the learning experiences and education systems that develop the next generations of adults, voters, leaders and activists who will be prepared to hold the full complexity of America’s truths.