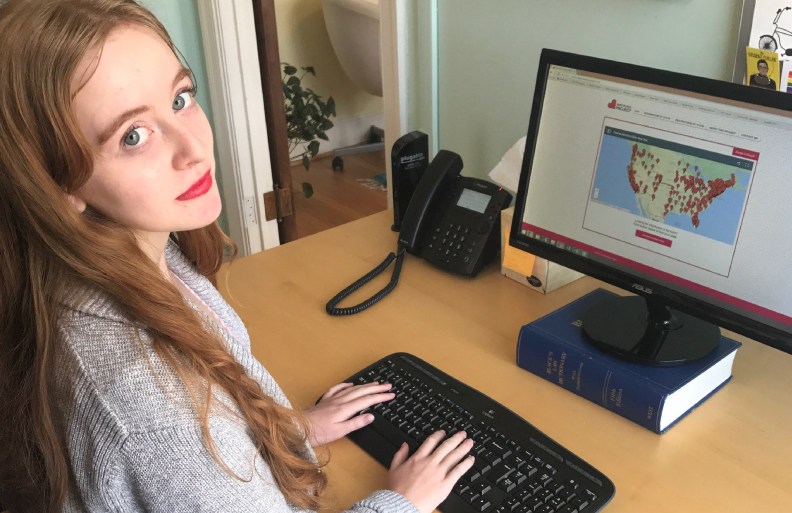 Big Picture Learning has been absolutely fundamental to my education thanks in large part to the fact that I had the opportunity to leave school to conduct internships each Tuesday and Thursday. During my junior year, I decided I wanted to further explore my interest in women’s rights by finding an organization in the Seattle area that could help me discover what was really driving my interest. Legal Voice was a perfect fit to help foster that.

Throughout my junior year, I would sit in on staff meetings and learn about cases that Legal Voice had taken on to improve the lives of marginalized groups. I was intrigued by all of it, but when it came time to choose a project for the end of my junior year, the topic of abortion access really stuck with me. I felt like it had the biggest controversy surrounding it and I was determined to somehow make a difference. I started by plotting a map, helping me better understand and outline what abortion access in America actually looked like. I knew I wanted to do something with the map, I just wasn’t sure what. I put it on the backburner over the summer and when I entered my senior year, I knew that I could continue building the map out into something really worthwhile.

At the beginning of my senior year, I knew I wanted my senior thesis project to revolve around the map that I had created my junior year, but I didn’t know what else. I started an internship with Cedar River Clinics, an abortion clinic with three locations in the Seattle area, and continued on with my former mentor at Legal Voice. We knew the map was important, but we began to realize that--in its existing state-it wouldn’t be enough. I began to think of the idea of a sort of listing, one which would draw the base of information from the map, but with additional details. I then realized that finding abortion care wasn’t the only problem; being able to identify and assess state laws against abortion was increasingly difficult to determine from a standard google search. I needed more than just a host for information. What I needed was to create an independent website where all of this information could be stored. Thus, the Safe Place Project was born.

I continued to work with both Cedar River and Legal Voice to verify that each clinic was open and to identify each state’s restrictions against abortion care. When I finished my project, it was honestly a breath of fresh air. I had worked tirelessly to create the Safe Place Project--even before I knew what it was--and I was immensely proud of what it had become. Working with Legal Voice, the next step was to let the world know that the project existed.

I honestly didn’t expect much to come from my project press-wise. I had gotten one local article, but a couple of days later I had received an interview from Broadly (an affiliate of VICE News). I was over the moon. I wanted my project to receive the attention is deserved and I knew that this was a starting point. After the Broadly article was published, I was contacted by Teen Vogue. And then by Cosmopolitan. A few publications didn't even talk directly to me but still wrote articles about me and my project. It was surreal.

I feel so amazed that my project has been able to receive so much attention. My hope now is that it can help as many people as possible.