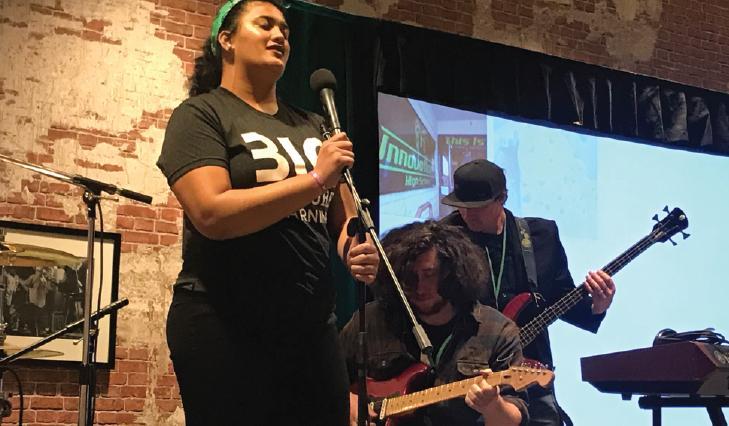 There’s a school I know well in Reno, Nevada. I’ll go ahead and name it, as it, like so many others, deserves to be named. Innovations High School in Washoe County. There are few schools I’ve come across that lead so hard and furiously with love as Innovations does. I know this because I know the school well, but also because I and 200 of my colleagues from across the Big Picture Learning network had the chance to visit there as part of our annual Leadership Conference.

Last year, Innovations found themselves the victim of multiple acts of vandalism, from graffiti on the side of the building to heavy rocks thrown through the front door and infant care windows; luckily not during school hours. They had their suspicions of who committed these acts. The who is not important to this article, but suffice to say, the characteristics of this person – their age, their race, their economic status, their social and emotional well-being – are very similar to those of the students who currently attend the school. Thus, Innovations could be forgiven if it – even temporarily – cracked down on security and discipline among its own school population. Who knows…another vandal could have been lurking in their midst.

But they didn't. If anything, they pressed the gas on love even harder. After all, there were no other vandals; only scholars. Innovations takes its culture very seriously. It spends two weeks at the beginning of each school year taking students through an intense culture-building workshop, designed to help both students and staff through the process of letting down their guards and opening up their hearts and minds to trust and love. Then, and only then, can the work of content scaffolding begin.

In December 2018, the Trump Administration’s Federal Commission on School Safety released its findings and recommendations in response to the Parkland -- and other --  School Shootings. In response to these tragedies, the commission heavily recommends (and indeed spends an entire chapter of its 177 page document) a rollback of Obama-era policy initiatives designed to combat racially disproportionate disciplinary policies. Sadly, and to be fair, these Obama initiatives have done little to curb discrimination when it comes to the punishment and suspension of minority youth. Take a deep dive into ProPublica’s Miseducation dataset to look into these ratios for your own community. I guarantee it won’t be pretty.

But not only had the commission’s pendulum swung away from empathy and back toward discipline, it swung even further in its recommendation of an increase of “armed school staff members in communities that welcome them,” states The New York Times. The Times also reports that the Commission’s report promotes the idea that Obama-era federal inroads toward combating “discriminatory practices has made schools more dangerous.”

This scares me. Worse, it hurts! In the face of school violence, must we truly shy away from conversations around discrimination?  Around oppressive and biased practices? If so, who are we really? As a society? As educators? How can we act as models for our young people if we don’t have the courage to stand up for our own convictions? Must we question the very definition of what it means to be an educator in this day and age?

Many in our network are touched by violence. Some every day. To give the commission some credit, they are clear that they are in no position to mandate new practices because – like we at Big Picture Learning – they recognize that each community, each school, and each student is different and likely requires a different approach.

But rhetoric is important. The Commission’s letter to the President (contained toward the very beginning of the report) appropriately states “the recommendations of this report do not and cannot supplant the role families have in our culture and in the lives of children. Our country’s moral fabric needs more threads of love, empathy, and connection.” But following this statement, the words love and empathy make no more appearances in the document. Discipline, on the other hand, appears 92 times.

If the Commission’s recommendations are not mandates, we will happily put them aside.  Instead, we’ll follow the recommendations of Innovations High School and countless other empathetic and courageous schools from both within and outside of our school network.

We will continue to lead with love. It’s the only way we know how.