The Talking Heads have a song called Life During Wartime and in the midst of life during a pandemic, lines such as, 'I got some groceries, some peanut butter, to last a couple of days' and 'Hope for an answer some day', speak into our situation; however, one of the final lines of the song, 'Burned all my notebooks, what good are notebooks, They won't help me survive' adds to the rhyming pattern but misses a great truth. Notebooks throughout history have helped humankind survive and thrive. Before her untimely death in Bergen-Belsen, Anne Frank survived her self-isolation through her famous notebook. Edward Jenner, the founder of vaccinology who developed an inoculation for small pox, was admitted to the Royal Society (the oldest independent scientific academy) for his notebook on natural history. Claude Bernard, the father of modern experimental physiology, recorded his thoughts on biology and medicine on stray sheets and pieces of paper which were published as his 'fugitive notes'. Viktor Frankl makes clear in his chronicle, Man's Search for Meaning that one of the things that helped him survive four concentration camps, including Auschwitz, was his concealed notes that he used to develop his psychology (which is based on the view that meaning comes from doing purposeful work, through love and from courage in the face of the difficulties and suffering).

Years ago, I spent two mornings at Mira Costa Community College with three staff members from one of our Big Picture Learning schools and half a dozen bench scientists who work in the bio-tech, pharma and medical industries. The teachers asked me to come over and look at what they were doing to develop industry badges for high school students. When all of us reviewed what these bench scientists in industry believe are important skills and habits to have from their perspective, to the person, they told us rarely do they make or look at reports or research papers, but they told me, everyone keeps and reviews notebooks because this is where the intellectual property and innovation live. 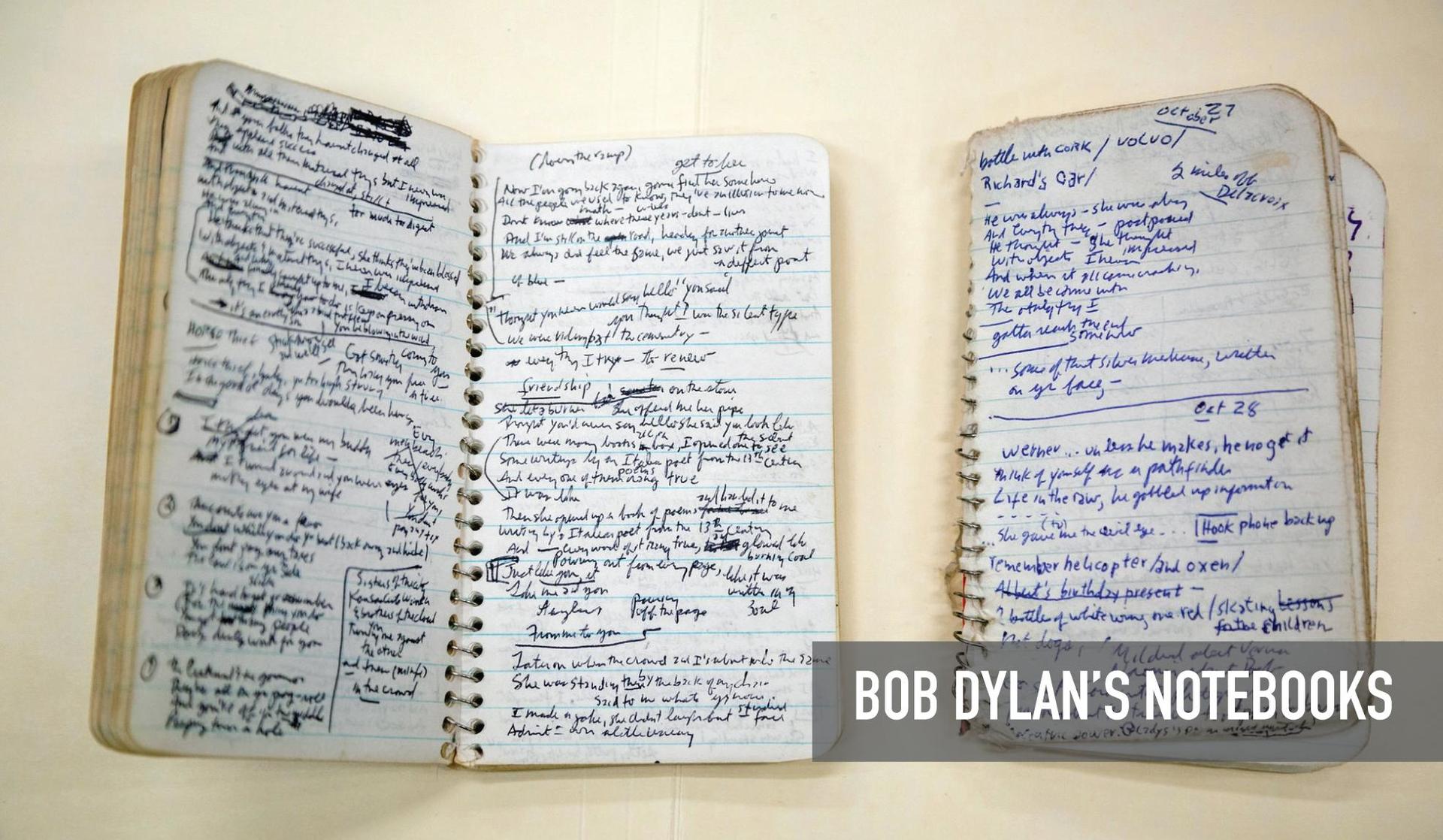 In stark contrast, our students’ notebooks and the sketches and ideas that are in them are rarely counted for much. Usually, research papers, reports, quizzes and tests are how students are assessed on what they know and do. Could it be that both k-12 and higher education are not in sync with industry in terms of counting what counts and recognizing what is relevant, even at a very rudimentary level in industry? It was eye-opening to hear industry people all say the same thing - the typical report/research paper is a rarity; they all keep notebooks.

Matthew Eddy wrote a fascinating article in 2018 on 'The Nature of Notebooks' having examined the notebooks of school children during the Scottish Enlightenment (18th and early 19th century). He says: “By the time students had finished school, they had learned to conceptualize the pages, the script, and the figures of their notebooks as indispensable learning tools that could be manipulated by scores of adaptable folding, writing, and drawing techniques”. Eddy argues that the process of writing notebooks was itself a 'mind-transforming performance' and experience. He comments that in addition to notebooks being used to record, store and organize knowledge, they also were used to demonstrate to parents what students had learned and “implicitly served as advertisements for what kind of instruction was on offer”. 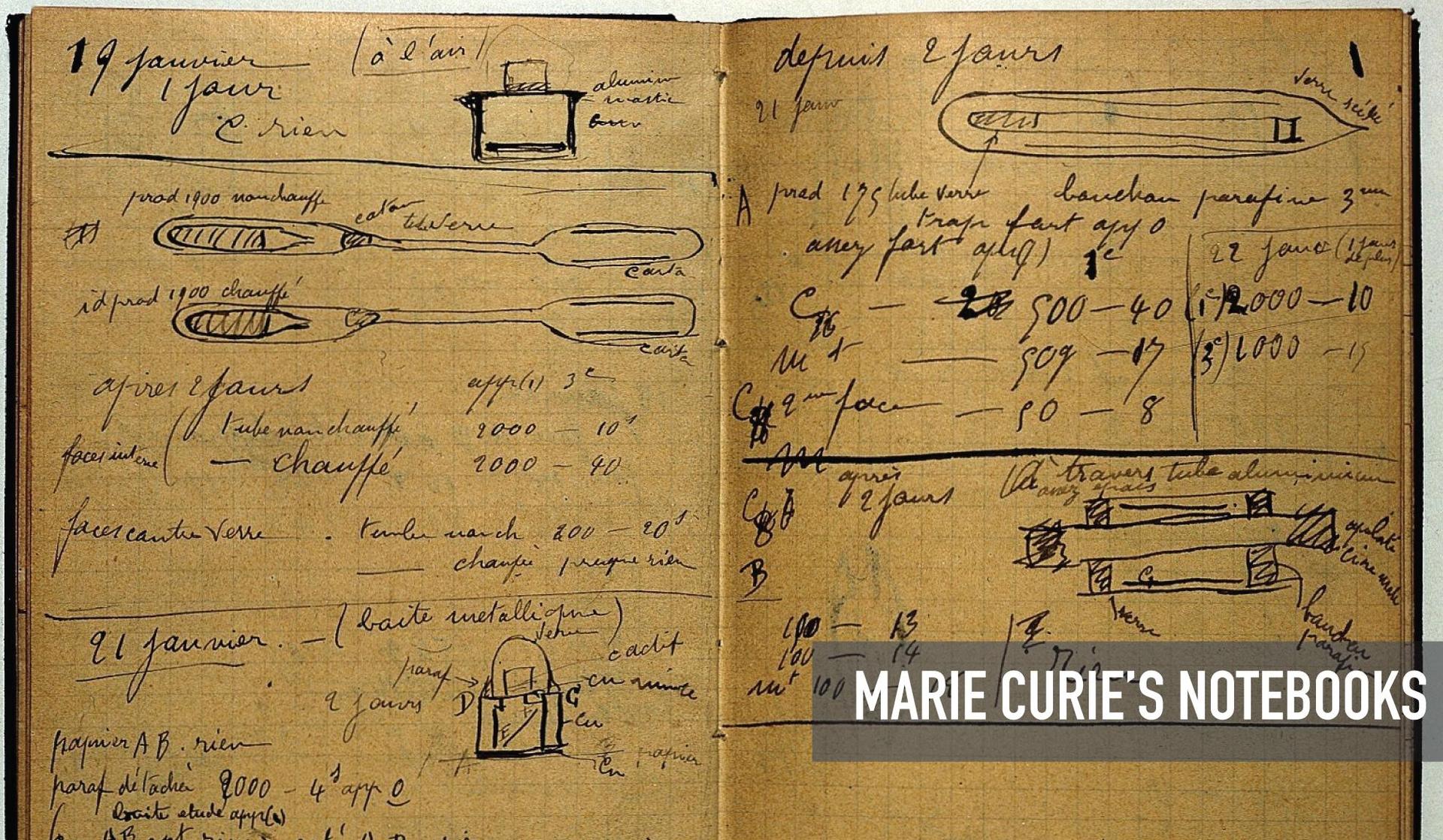 Elizabeth Hamilton, a Scottish philosopher and educator states: “The leather binding of (note)books, the paper which forms the leaves, the thread on which these leaves are strung, and the characters that are printed on them, may be made instrumental in invigorating the conceptions: and I am persuaded, that habits of attention thus acquired, would be found of greater use in developing the faculties, than any lessons.” Eddy argues that the nature of the school notebooks allowed students to use them in a 'self-directed, interactive manner', and his view is supported by the French social historian Michel de Certeau who asserts that the use of notebooks puts students in “… the position of having to manage a space that is their own and distinct from all others and in which they can exercise their own will”.

Another strand of the conversation with the bench scientists was around the use of I-pads with a stylus as a notebook. For most, the jury was out on I-pads. There is something about writing and drawing and drawing and writing that is part of the idea. Dr. Neil deGrasse Tyson has a vast collection of fountain pens and the notebooks he has written. For Tyson writing in a notebook is about wanting to be expressive. “People think a word is just a word, but depending on how it’s written, you can convey emotion. … Because writing is now done on computers, we’ve lost the edge of conveying emotion.” 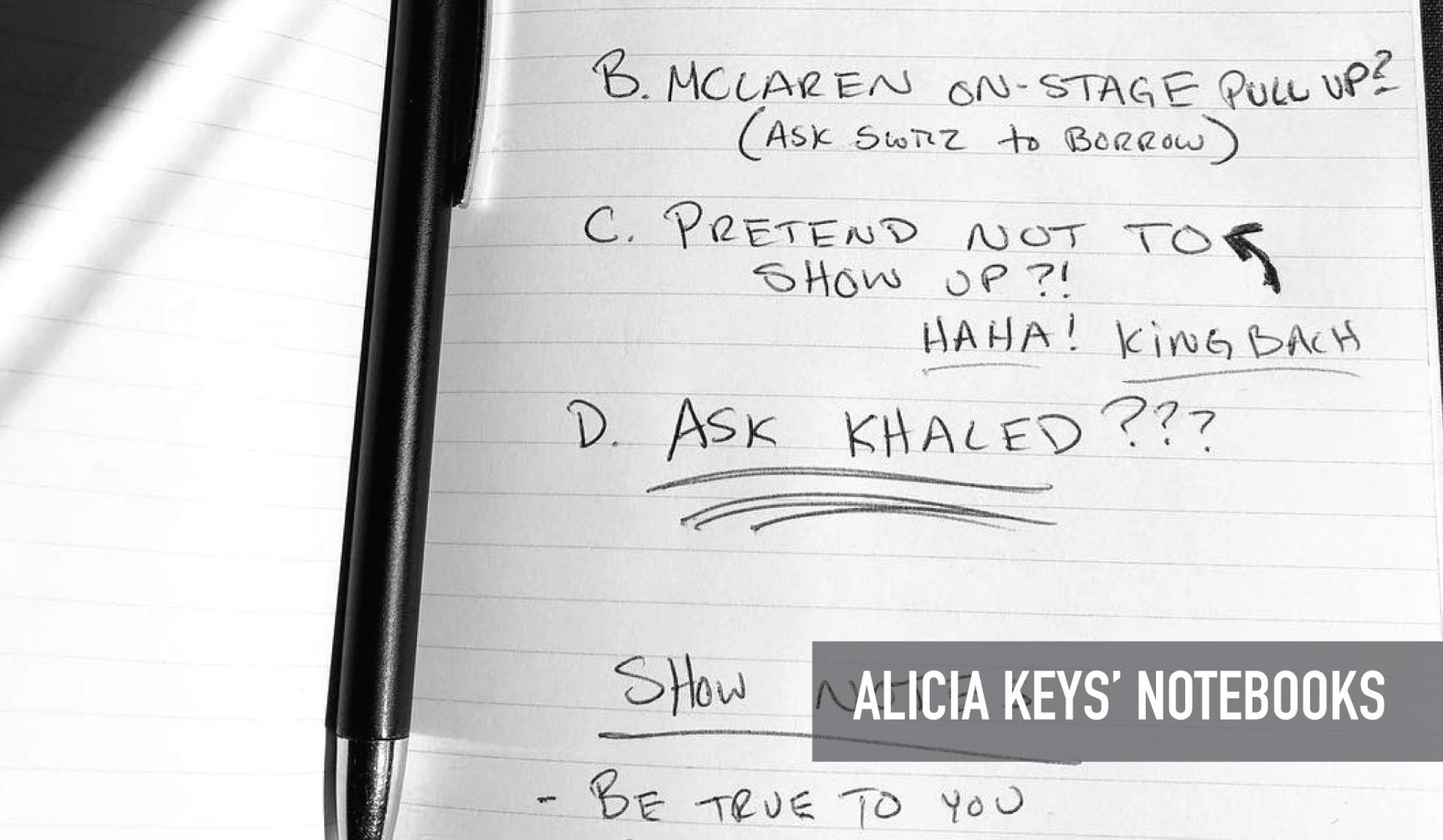 Interestingly, a notebook is the opposite of what school constantly exclaims - “Assess what students must know and be able to do.” With notebooks, first you are doing something and then taking notes on it or you are jotting down an idea on the fly or just playing around. This is a big switch that rarely is discussed or given any space in schools to be practiced, let alone recognized. This is ‘do and be able to know’. It is almost always is the difference between out and inside of school. It is where informal learning can and at times does meet formal learning.

In school, to a vast extent, you are told what to know. The content is dictated by the school system. Even in project-based learning most often your projects are developed and assessed against pre-existing content standards and measures of what you should know and be able to do. Out of school, there is doing and knowing, and then, understanding. The standards are being created as you go and learn; they are not being dictated. And much of this understanding and the steps taken to get there are in evidence in notebooks or they are filled with creative and ‘off-track’ ideas that may be dead-ends but are often important roads on the journey to learning and understanding. This realization seems to be more stark now than it ever was before. 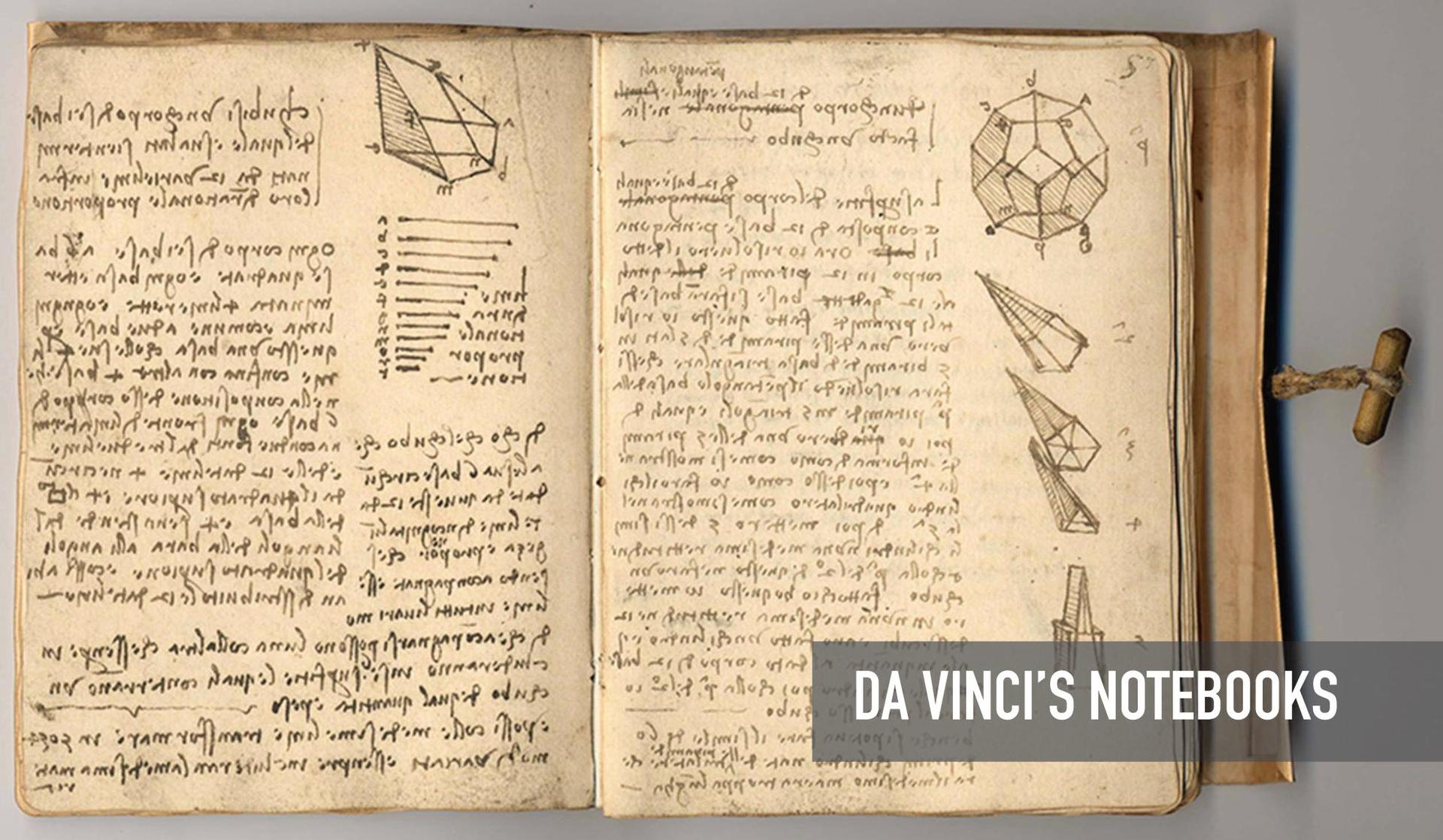 As we look at the world at-large, we can easily see the value that is placed on notebooks. In a court of law, they are admissible as evidence and are frequently the means to settle disputes over propriety and intellectual property. Museums all over the world display the cherished hand-written and drawn notebooks of Da Vinci, Madame Curie, Darwin and Einstein, which are encased in glass. The cherished notebooks of poets, writers, artists, inventors, scientists sell for upwards of millions of dollars. From Bob Dylan to Alisha Keys people seek out the handwritten notebooks of our songwriters. It is suggested that the rediscovery of the 'lost' notebook of Ramanujan, the Indian mathematical prodigy, is comparable to the excitement that would come if Beethoven’s fabled 10th Symphony was to actually be discovered. It is ironic that the world places such a high value on the intellectual property of the hand-written note and sketch and schools barely, if at all pay notebooks any mind.

The value of a notebook can also be seen in the way that most of the authors themselves take great care in keeping them. Early on in his book, The Tangled Tree: A Radical New History of Life, author David Quammen mentions that Darwin took exquisite care of his notebooks. They were special to him before they were special to the world. He labelled them alphabetically. In his B Notebook, he drew his diagram, known as The Tree of Life, that changed the world. It was no mistake that there were many Trees of Life before Darwin’s. He used the phrase and drawing to prove his point. This visual metaphor has withstood the test of time only to be iterated and changed with our expanding understanding of evolution and the tangled nature of nature. Below is a more recent version from this book that reveals what we further understand about the complexity of evolution. These sorts of visuals help the world understand. 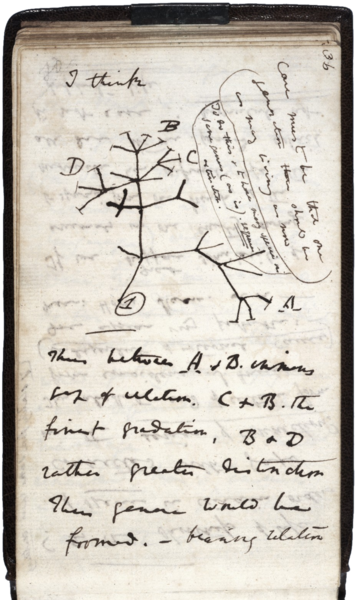 A student or a child’s notebook is a window into their world. What are they really pondering about? What sketches are they making that inform us and themselves of who they are and what they are hoping to become? What are they pursuing or questioning ‘on the margins’ and what are the things that we can support? In these times where our children are home with us, if you want to start a conversation with a child, ask them about the notebook they are keeping and listen to them describe what they are making in them. This is one sure way to get a person’s attention. It shows that you are interested in me and therefore I’m interested in telling you what I’m doing. The next step is the hardest - just keep on listening and wait to see where it leads.

Another approach is one that storyteller Colin Levy took while animating his grandfather’s notebooks - My Grandfather’s Memory Book. While on a call with Colin, he told me he was innately interested in art but on a closer look, it was his grandfather who encouraged his interest, gave him watercolor sets and brushes, and showed him how to use them. Was it the ability to get better at painting that Colin wanted or was it the relationship with his grandfather that he wanted? Perhaps it was both. The WHAT of interest and the WHO of relationships mingle together. Families carry this work out for us naturally. Most Big Picture Learning schools do Who Am I projects where students and staff engage in autobiographical searches, reflections and representations. Colin and I discussed how Who Am I projects fit so well together with his story about reviewing notebooks of family members. The very conscious choice of a student to investigate something a family member made may very well reveal a great deal. Who Am I work gives us a window of opportunity if we take advantage of when interests and relationships through a handmade object, like a grandfather’s notebook, are revealed to us.

"They're filled almost exclusively with markings he made with his own hand, based on things he saw with his own eyes and thoughts he was experiencing in his head,” Levy said. “It's so wonderful to get to experience moments from his life through his point of view. You can really sense him observing, feeling, and thinking as you flip through the pages.” - Colin Levy

When “observing, feeling and thinking” come together all at once through something handmade, you see the knowledge in the skill.

A few years ago, I was on a STEM advisory board and I asked if we could get teachers to look at what was inside of student notebooks. They didn’t even think it was worth a moment and dismissed it saying that teachers don’t have time to look at notebooks. They are too busy teaching science. I tried to explain but we quickly moved onto the next agenda item. Fortunately, there are teachers who do pay attention to notebooks and they reap enormous benefits from the understandings they are gaining about their students.

We are always getting messages about the value of notebooks from those who achieved great fame. Consider the words of Frank McCourt: “Insights don't usually arrive at my desk, but go into notebooks when I'm on the move. Or half-asleep.” When you are engaged in the world, you better have that notebook handy be it by your bedside or in your back pocket, at a park, or daydreaming in school.

Everyone in the world keeps notebooks: police, fire-fighters, trades people, lawyers, doctors, nurses, reporters, artists, scientists, architects, chefs, musicians and people in business. The practice of keeping a notebook is common across all fields. It is often a lifelong routine and yet, schools ignore notebooks for their real value. 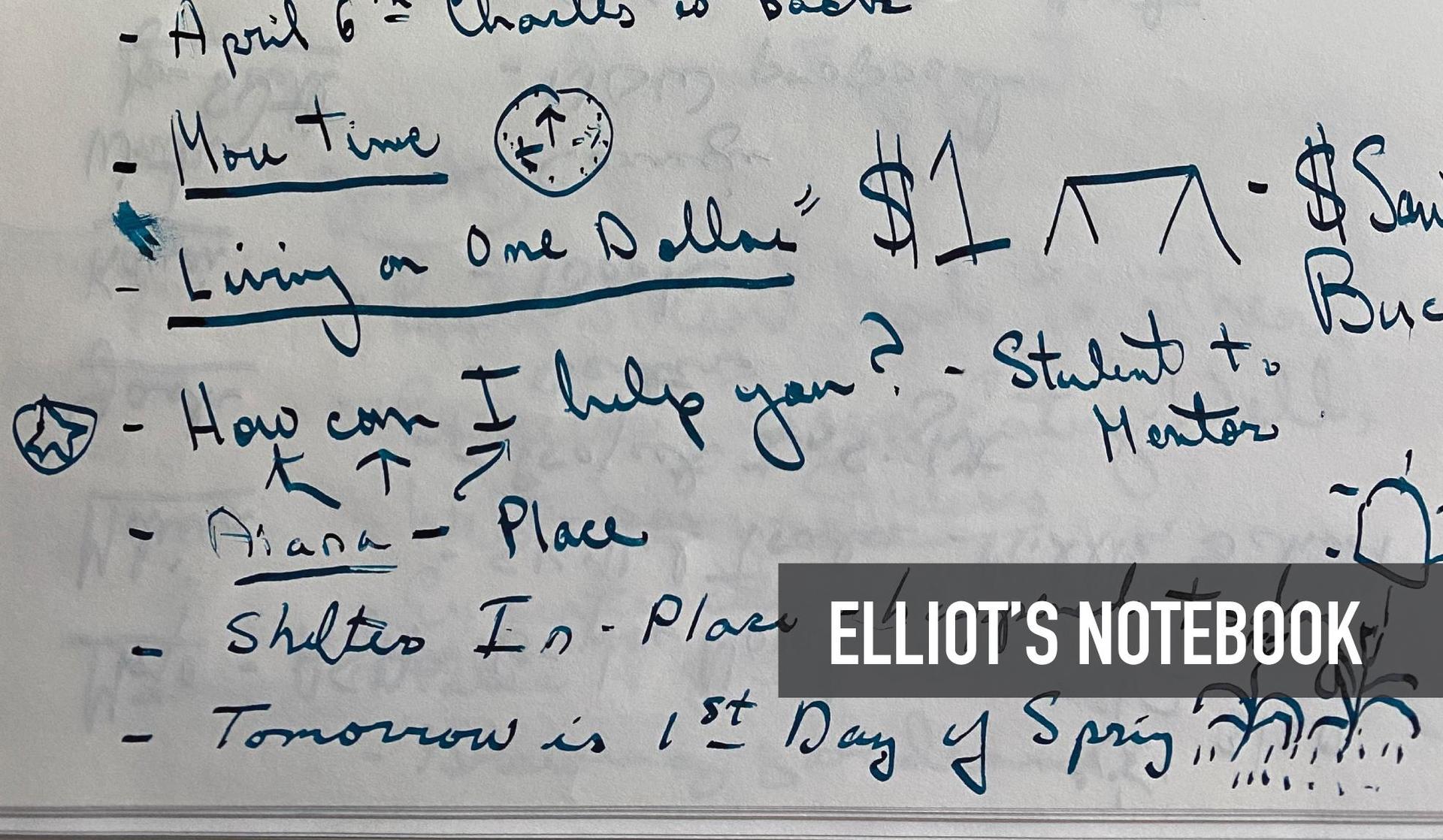