One Household at a Time 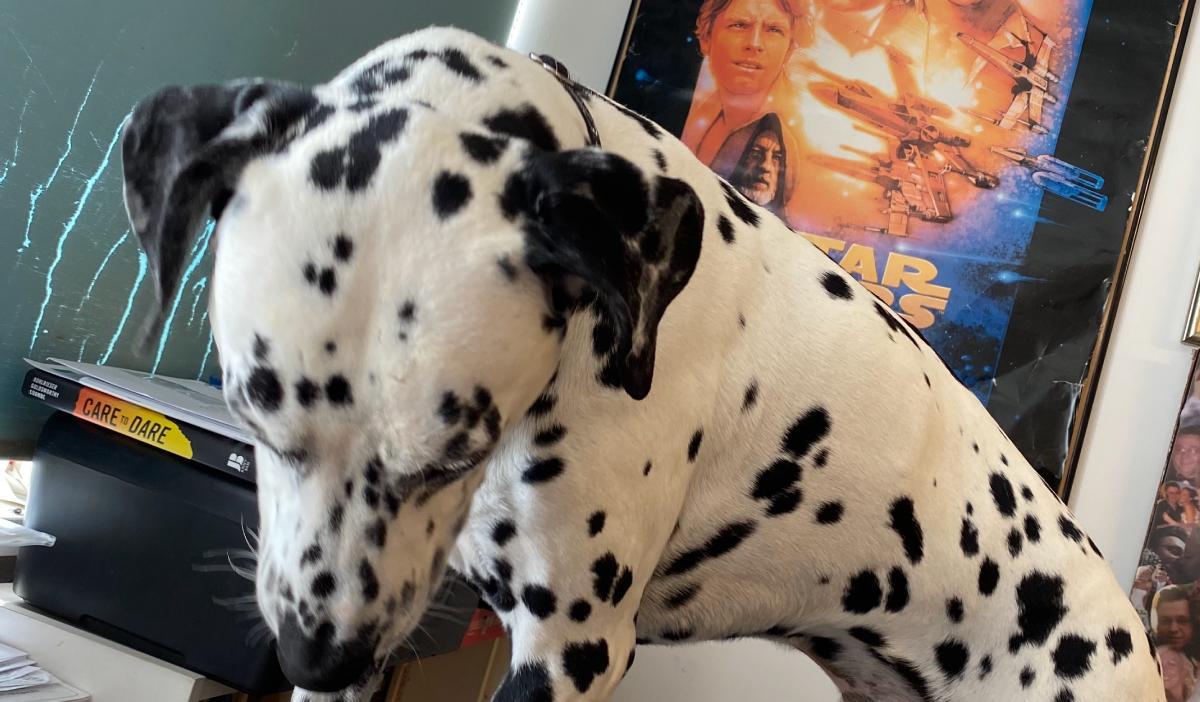 When I started to get ideas together for this piece the UK was still in a pretty full lockdown. We didn’t have measures like France, where permission was needed to go out of the home, but we did have a number of restrictions in place.
Our schools were closed for all but vulnerable students and those of key workers such as hospital staff. All pubs, restaurants and other leisure facilities were fully closed, along with most shops aside from supermarkets, other food outlets and hardware stores for essential materials. The country was encouraged to exercise but once a day and with a time limit. Although, living out in the countryside when not in Doncaster for work it’s been pretty uplifting to see walkers, joggers and cyclists - often in family groups - going past. Maybe a sign of something positive if it continues post pandemic.
Over the last few days though things have changed. We have had millions of workers at home, either working from there as my team has been mostly doing, or being furloughed with the government supporting their salaries to avoid redundancies. Some have suggested that the number was so unexpectedly large as to be overwhelming for the treasury and, as such, the drive to return to work and release some lockdown measures has been as financially driven as led by ‘the science’ as we've been told at every briefing. But whatever the motivator, things are in the process of changing massively as I write.
There are still some strange anomalies in the rules. I can meet with a friend in a park as it’s outside, and even play golf or tennis with them, but I can’t visit my mother and sit in her garden. Then there’s public transport. Workers in construction and manufacturing especially have been encouraged to return to work (along with everyone who cannot work from home and who has a workplace that can be ‘Covid safe’) but they should avoid public transport, which equates for 17% of all work travel arrangements and 36% in London. The Tube was packed on only the first day.
It’s difficult to know what to think. Staying at home seemed to be the one thing that was bringing infections down - and even then we were still getting around 600 deaths a day quite regularly. We had supermarkets where one way systems and distancing measures seemed decoration more than anything. We had people chastised for sunbathing or spending time in parks. Now this is almost encouraged.
Was too much caution in place and is it time to move forward with gradual and sensible measures to enable us to start functioning again? Do we have the capacity and creativity to find solutions to get the economy moving without endangering lives and creating a second peak? Was staying at home the one saving grace we had, and has it been abandoned to satisfy a thirst for freedom exacerbated by VE Day celebrations, press and political pressure on a prime minister in an unimaginably difficult position, at a time where the individual over society, and British stiff upper lip mentality has been prominent due to Brexit?
Things in countries around us -- and even in the different countries that make up the UK -- seem a little more definite and sure. However, we've been left with a lack of clarity and a seeming shift of responsibility for action and care placed on the general public and employers. People are feeling pressure, financially and emotionally, and who find themselves amongst others who think nothing of dancing in conga lines, waving union jack flags. To say it’s unnerving is an understatement.
Throughout all of this the work of Big Picture Doncaster advisors and the wider team, including children and their families, has been brilliant and a real sign of how strong the relationships we have are. There are obviously some things that have been difficult, and some families have been harder to maintain contact with than others. But the continuity of relationships and ongoing project support has given students and families certainty and security at a time when these have been in short supply.
Our days begin with a staff check-in through google meets to update on where we are and to spend some time just chatting and laughing about highlights of the day or evening before. We are often joined by Owen, the son of our lead advisor Heidi, to get his take on the situation. And I am often advised by my dalmatian, Henry, who likes to offer his input to our work. I think that this is an essential part of every day just to keep everyone aware of any development locally or nationally that could impact our work. It's also just as a point of sanity. We finish each week with an opportunity to share something: an appreciation, pledge or accomplishment, something we are doing that is far removed from work, or a creative endeavour that we will be taking part in. Having worked from home setting up a school previously I know that the days, evenings and weekends can blur. So I want to ensure that my dedicated team also has the opportunity to draw the line and look after themselves as well.
We have two distinct cohorts of students at Big Picture Doncaster. One is an older group of mixed ages between 13 and 15 who spend a large proportion of their time with other providers as we build the curriculum model in the school. The other are 12 year olds who have been with us from the start of their secondary education in September. 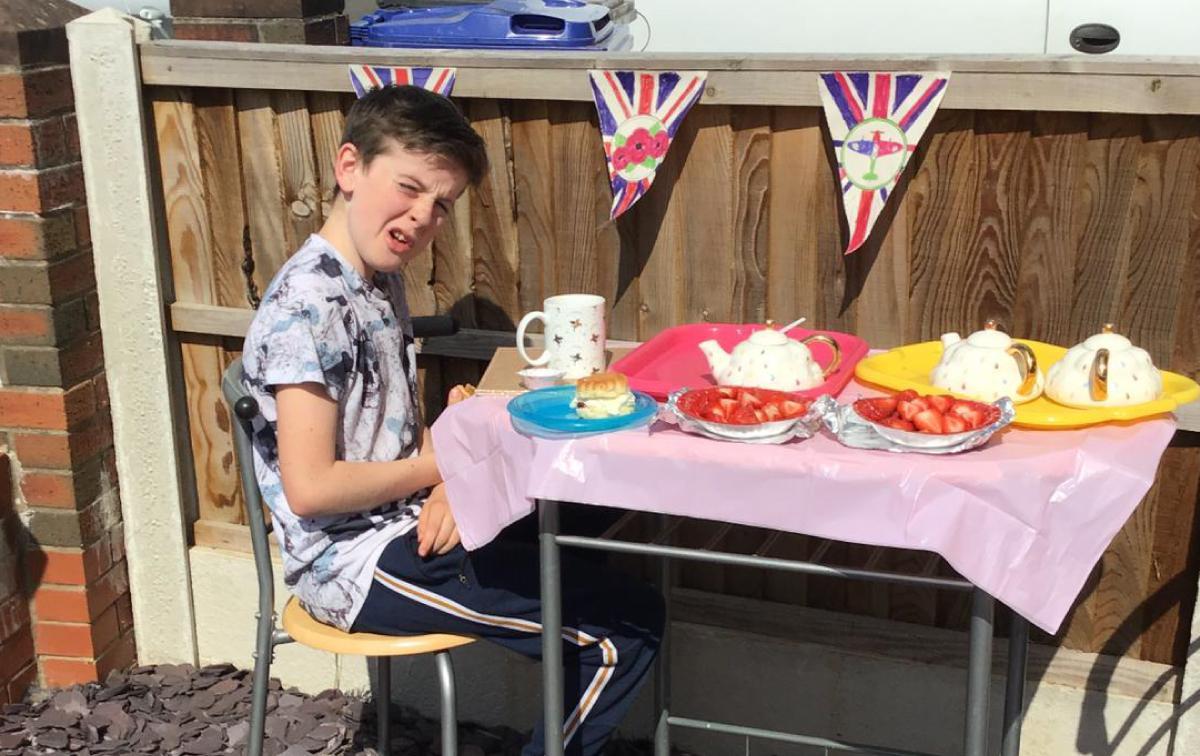 The older cohort are children who have been disengaged and disillusioned with education for a long time and, in a number of cases, have not attended meaningfully for five or so years. These students are ones that we have been engaging more and more with since November but who still present significant challenges. They haven’t really been part of a family in the school so have required some real work linking up to our online offer and different forms of contact. Our provision coordinator, Ed, has worked with these students and other providers (as you might imagine an internship coordinator would in other Big Picture Schools) to build a platform for work. It’s not been easy but all students, often with parents, have engaged in work and contact either through email, telephone or WhatsApp video calls. I’m really proud to say that we have not ‘lost’ any of them due to the changed circumstances of Covid 19.

Our younger children were in school with us as we started to prepare for the closures that seemed inevitable. This meant they were more prepared to shift to online work as a method of communication and check in. Advisors check in and out daily with these students through Google Meet. We have also had fancy dress days on a Friday (featuring a principal making use of a lockdown beard to portray a very questionable Obi Wan Kenobi during Star Wars week).  These check-ins also continued throughout the period that would have been our Easter break. What’s been really pleasing and impressive is that we have had some students come along to these check-ins who have not participated in school life as readily before the closures.

We don’t deliver lessons on line or set timetables for students but we have suggested to parents that a sense of routine can be valuable for students, just as with staff, as a need to demarcate between different parts of the day, and days of the week. We have students that may need to juggle access to computers or work spaces with siblings or parents working from home, so flexibility - and one household at a time - has been essential.

Our online materials contain a range of literacy and numeracy work as we feel it’s vital to keep the building blocks going. But we also have art projects and personal and social development pieces they can work on.  We also encourage the continuation of projects that were started in school in cases where they can. Students have also found their own home based projects, such as stripping down and rebuilding motorbikes or painting boats. While we’d love to get these more documented to use as portfolios of work, we’re not pushing it to avoid overloading or conditioning learning. These students are very young, very new to a project based model of learning and in a number of cases haven’t done much more in school than attend an hour a day to make posters just to avoid being an exclusion statistic. So while they are engaging, the independent project design that we hope to guide them towards is a little way off when they are at home!

One thing that we took from the excellent conversations Big Picture Learning Coach Loren Demeroutis has set up was the idea of Corona Diaries type work that other schools in the Big Picture Family had been doing. The advisory team set about devising a ‘Bingo Card’ with a number of mini projects that students might get involved in as well as some smaller, one off activities or tasks. These ranged from making sure that physical needs were met through daily exercise, alone or as a family, to devising and cooking meals, to doing good for others (never expected to see Callum painting his sister’s nails!). 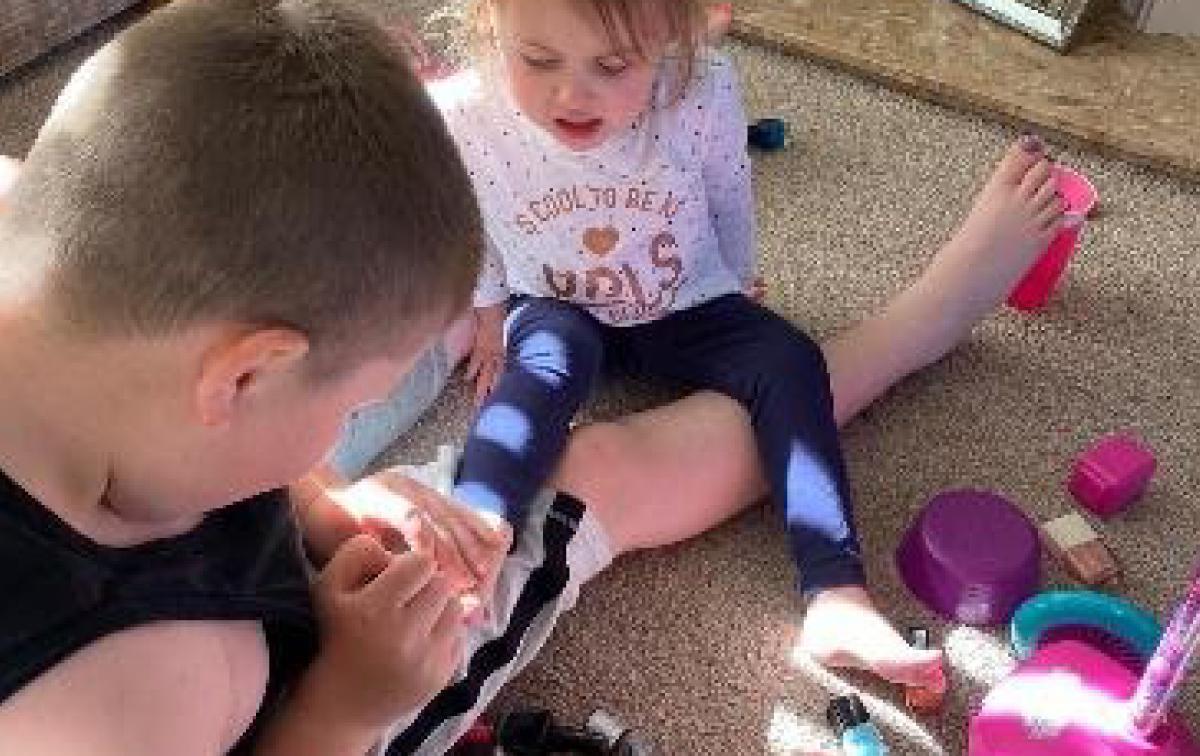 There was even a challenge to grow something, which has led to some pretty good progress with chilli plants on my window sill. 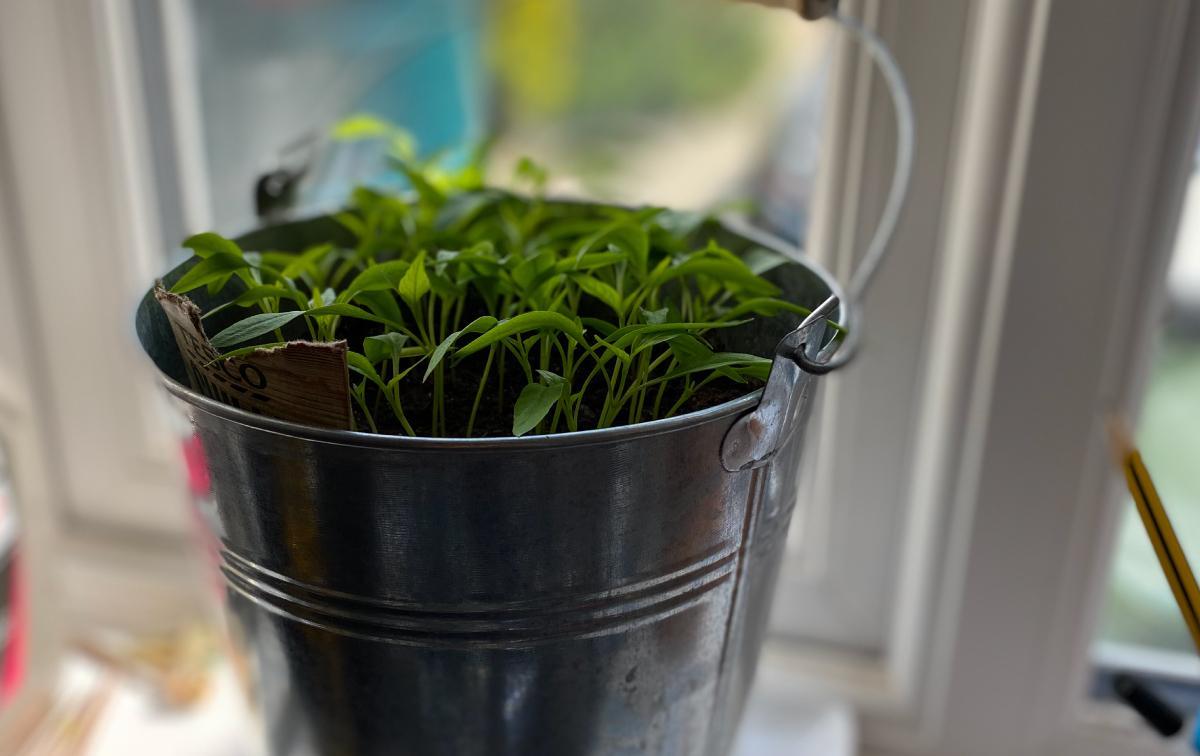 The team also wanted to encourage students to learn a little more about the pandemic to hopefully ease concerns caused by rumours and conjecture. As such, some of the work included making posters to show support for the health service; making cards for the 100th birthday of a Royal Air Force veteran who has so far raised over £35 Million for the National Health Service; a ‘scavenger hunt’ to look for positives in the surrounding community; or a thankful cup to recognise things to be grateful for even while things are in lockdown. 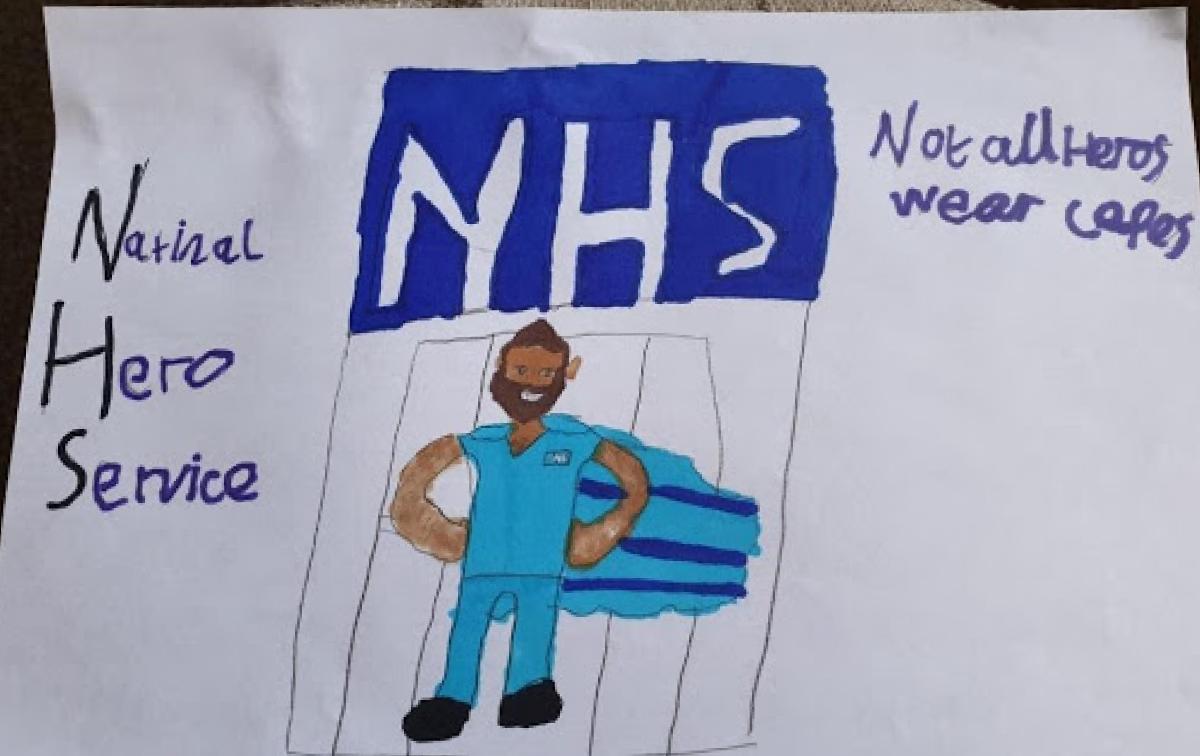 We're now moving into a new set of circumstances that seem less certain, with a lack of  boundaries and definitions that have made the last couple of months seem secure, even if restricted. Starting in June, and provided we don't see any increase in infections, our primary schools are due to reopen more fully for some groups of students. Sometime after that we will see more interaction with secondary school students who have exams in the next academic year. And it looks like September will be the month in which we begin to welcome back all students in anything like the way we are used to.

For us this means a need to get clarity over our new cohort; when we will meet them and where they will come from. It means challenges in terms of safe practices and social distancing with students who can have emotions that turn to physical expressions of frustration. It means continuing to onboard and develop new staff who have joined us from Easter but have not spent any time in the actual school! And all of this while trying to continue to build and review a model and curriculum that seems out of place in the British educational environment.

No matter these challenges, the adjustments that the team and our learners have made during this latest period of the life of our fledgling little school, and the support from the Big Picture Family through Scott Boldt - our man in Belfast, the Erasmus group of Big Picture Europe, the crazy beauty of Elliot Washor's global meeting, or the wider Big Picture network, gives me so much confidence that there will be a time after this in which we will all get there together.