Visitors to my Met Sacramento classroom introduce themselves by answering three questions. 1) What is your name? 2) Where are your people from? and 3) What are your interests? My students know my introduction by heart, and especially my interests, so much so that they chose this as our advisory’s quote for the yearbook.

My first encounter with the Met Sacramento High School and Big Picture Learning is when Eliazar de la Cruz, a fellow Chicano cultural worker, recruited my wife, Victoria Lemus, to work as an advisor in 2005.  At that time, I was pursuing an MFA in Art Studio at the University of California at Davis.  I remember going to the Met to talk to students about art, culture, and activism by facilitating workshops on silkscreen printing, recruiting students to participate in immigrants’ rights marches or by facilitating Kick Me Outs about my work as an artist.  I was there so much that I became like an honorary staff member.  Listening to and seeing Vicky develop and oversee projects became part of my own teaching practices a few years later when I graduated with my MFA and started teaching at Sacramento State and at UC Davis.  I taught printmaking and Barrio Art at Sacramento State, and introductory courses in Chicana/o Studies (history, culture, and art) at UC Davis. I found myself having access to 75 to 175 students per class, and an opportunity to not only empower my students but also the community. This is before service learning became the thing to do in college classes, but something that Big Picture Learning, and Chicana/o educators and other people of color had been doing for decades, especially during and after the Civil Rights Movement.

I reinforced the concept of Comuniversidad that I learned from my late mentor Ricardo Favela, with Big Picture Learning curriculum being used by Vicky at the time, and set out to do Proyectos comunitarios, taking hundreds of students out of their University bubble and into the community to empower others, and at the same time empower themselves. We organized Chicano youth conferences, community art festivals, festivales de libros, cultural nights, college visits, community murals, community gardens, Chicano theatre, community tours, and more.  Oftentimes, I included Vicky’s advisory in the events organized by my college students. For example, I remember taking a handful of Vicky’s students to help at a community art day at a migrant center in Dixon, California. These inner city students had no idea that migrant centers existed and learned a great deal that day.
I loved teaching at the college level, engaging students that were eager to learn about themselves and their culture.  However, I was faced with a few issues along the way. I realized that working with university students for up to a year and a half was only scratching the surface of Comuniversidad.  Also, not knowing how many classes I was going to teach from quarter to quarter or semester to semester as an adjunct faculty member was stressful.  At this point I started looking for a full-time tenure track position that fell within my interests: Chicano Studies and Art! I found a job opening at San Diego State that felt like it was written for me. They wanted a professor to lead a community arts program through Chicana/o Studies that bridged the university and community.  This was what Comuniversidad was all about!  I completed the application, gathered my letters of recommendation, and was all set to go. Then I started thinking about all the years I dedicated my life to developing a working relationship with the Sacramento community.  We had recently purchased a home, Vicky loved her job at the Met, and her close knit family lived here.  It was in that moment of introspectiveness that clicked for me. The thing that I loved most about my job as an adjunct professor was working with first generation college students that were denied access to their history, culture, and language.  I thought to myself, I wish I would have gotten to them sooner.  That’s when the realization came that I needed to be in a high school classroom. Not just any classroom though. I needed to be in a Big Picture Learning classroom, at the Met Sacramento High School, empowering kids beyond a year or two, and beyond four walls.
The stars aligned perfectly.  In the Fall of 2011, I became a Met Sacramento High School Advisor. Because Andrew Frishman (now BPL's Co-Executive Director) was accepted into a EdLD program at Harvard, and Vicky became the Met’s new Learning Through Interests Coordinator, the Met Sacramento needed an advisor. Thank goodness Andrew applied to Harvard when he did!  Vicky’s advisory was about to enter 11th grade, and I became their new advisor. I knew that advisory pretty well, and it was an easy transition. That class graduated in 2013, and nicknamed themselves Team Xicky. We are still in contact with many of them. Since Team Xicky, I have graduated two advisories, one who lost their advisor in 9th grade, and one who was mine since 9th grade and graduated in 2020 during the pandemic. In the Fall, I’ll be taking my 4th advisory, and I’m ready for the next four years with them.  Over the past nine years, I have empowered dozens of students, and I have empowered myself in the process. 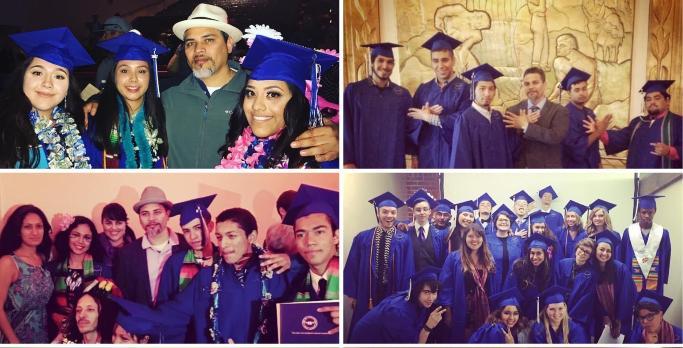 We are lifelong learners, and I often tell this to my students. At the Met, I advise MEChA de la Met, the Chicanx student organization on campus.  We take great pride in celebrating Mexican culture, and providing cultural event opportunities to the whole student body and their families.  We even have our own Raza Graduation Ceremony where we honor our Chicanx students and their families in their native language.  MEChA de la Met also participates and organizes community marches, rallies, and protests, such as the César Chávez March, the Women of Color Contingent of the Sacramento Women’s March, and Black Lives Matter actions. I also advise the Met Outdoors Club. I must add that through the Met I found a new passion for the outdoors.  I want to thank Big Picture Learning colleague David Berg for introducing me to the outdoors, and the National Outdoor Leadership School (NOLS).  Every year, the Met sends a student of color to a month-long expedition in the continental United States.  Right now, recent graduate Cruz Yochum-Valenzuela is backpacking in Wyoming. I myself completed a month-long course in Canada’s Yukon Territory, backpacking the Kluane Mountains and whitewater canoeing through the Kluane Lake, the Kluane River, Donjeck River, the White River, and the Yukon River.  It was a life changing experience! Throughout the year, the Met Outdoor Club hikes at least six trails within one and a half hours from Sacramento.  To most kids, the Met Outdoor Club offers them their first hiking experience.

My students get a lot of attention from me.  I work hard to create a family like atmosphere in my room that is conducive to learning. I hold my students to high standards, and I don’t lower the bar.  My students describe this as “tough love.” It is definitely love that drives my work and my interactions with my students.  There is a saying that states “Love what you do, and do what you love.”  I’m definitely doing that.

Hola, my name is Xico González. I’m a Chicano, and I’m interested in art, culture, activism, and the great outdoors. 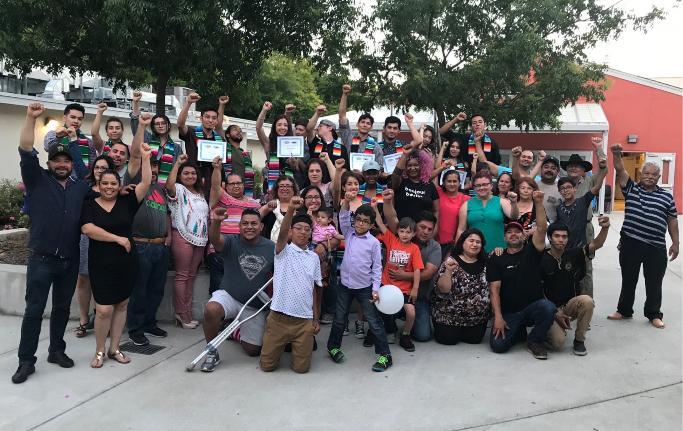